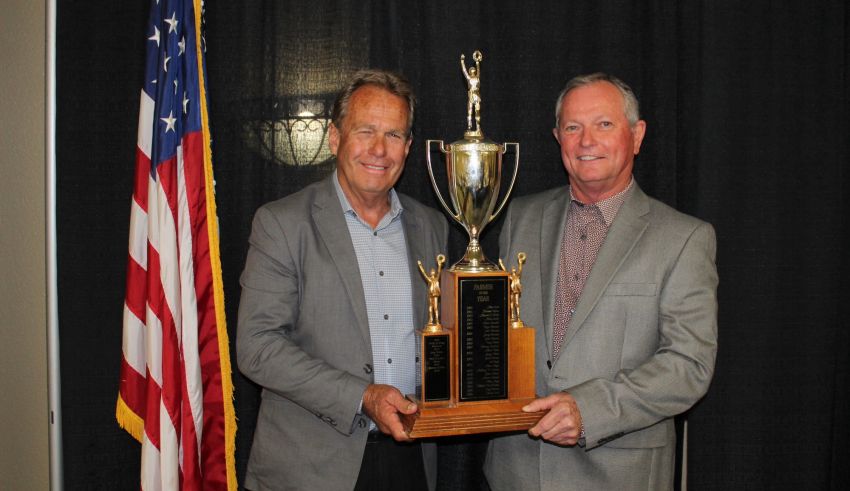 Pistachio and almond growers Ronnie and Tom Clark were recently honored by the Kiwanis Club of Tulare as it's 61st Farmers of the Year (photo by Matthew Malcolm, Pacific Nut Producer Magazine). The “Noon” Kiwanis Club of Tulare recently presented its 61st “Farmer of the Year” award to Ronnie and Tom Clark, pistachio and almond growers from Tulare at the club’s annual luncheon in Tulare.

Ronald (known as Ronnie) has lived in Tulare County his entire life, is married to Robyn with sons Christopher and Michael (deceased) and stepsons Derek & Brandon Walker.  Brandon works with Ronnie in the family business. Ronnie graduated from Tulare Western High School in 1970, attended COS and Cal Poly, and started farming in 1975 north of Tulare growing cotton, wheat, and corn. A partnership with his father Bob, uncle Don, and cousin Tom known as Clarklind Farms was formed in 1983 and today farms pistachios and almonds. Clarklind Farms has also received numerous awards over the years for their high yields in grain corn Ronnie serves on a variety of boards including Kaweah Delta Water Conservation District board, Kaweah and St. Johns Rivers Association, Mid Valley Growers, Pistachio Growers, Inc., and the board of the International Agri Center. In the past he has also served on the San Joaquin Valley Cotton Board, California Pistachio Commission, Tulare High School Ag Advisory, and is a member of the . Ronnie and Tom both support many local efforts for youth sports, youth 4-H and FFA, youth exhibitors at the fair, and so many more charities too many to mention. Thomas (known as Tom) has been married to Denise for 42 years and has three grown children:  Ami, Chad, and Drew and five grandchildren; Drew becoming the fourth generation farmer in the Clark family.  Tom attended Tulare Western High and Fresno State University and played varsity golf all four years in high school. He is a partner in the Clarklind Farms operation with Ron which was formed in 1983. He began working at the age of 13, shoveling furrow ends during the summer and at age 16 was promoted to combine driver during his summers. He worked in laser scraping when he was 20 years old, in the early years of this emerging technology. He has been farming for 49 years in all and has served on the Tulare Irrigation District Board. He coached high school junior varsity golf for three years, and in his free time enjoys golfing, snow and water skiing and wake surfing.

This annual awards luncheon recognizes the lifetime achievements of outstanding agriculturalists in our community and provides an opportunity for the Tulare Kiwanis to highlight the value of agriculture in our region and recognize an outstanding person or family.  In the past they have recognized fathers, sons, brothers, cousins, and many more.

The luncheon included a video montage about the honorees and a look back at the past 60 years of honorees – an emotional and touching tribute to our farm community and the many wonderful farmers in our great community of Tulare.