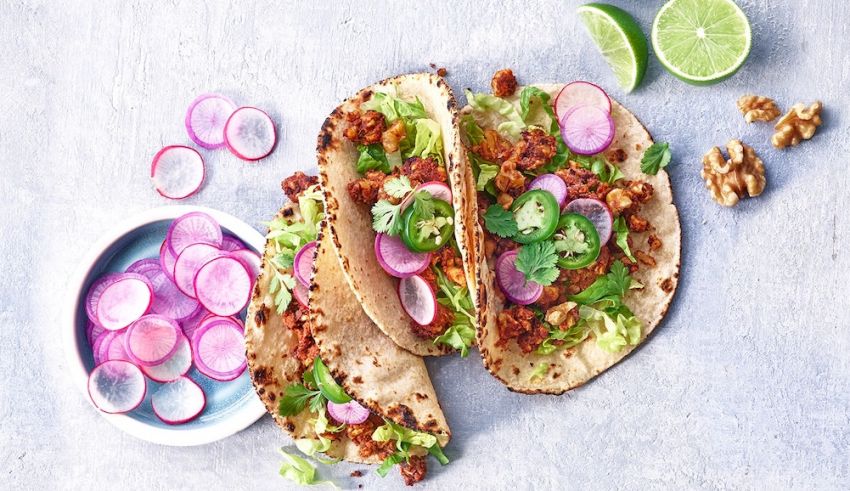 As consumers seek more plant-based options and creative recipes for at-home cooking, the California Walnut Board encouraged consumption of walnuts by linking to the ever-popular taco. The recent campaign capitalized on a timely and trending food holiday: National Taco Day (October 4). Americans are eating 4.5 billion tacos annually, providing an opportunity to build demand for walnuts. Two appealing walnut meat taco recipes were placed in consumer magazines and newspapers, with an estimated 177 million views.
Adding walnuts to a taco recipe is a simple and enticing way to help build demand, especially as many Americans (about a third of the population) are also following a flexitarian diet – primarily vegetarian, with the occasional incorporation of meat and fish. October 4 marked National Taco Day, providing the timely moment to appeal to consumers searching for new and exciting ways to celebrate the holiday at home.
“To inspire and encourage consumers to do more with walnuts, the Board utilized the timeliness of National Taco Day to bring attention to the versatility of walnuts as a nutritious, plant-forward option for consumers to celebrate,” said Jennifer Olmstead, senior director of U.S. marketing and communications.
In order to leverage the holiday to help drive consumption, the Board shared a recipe press release with a simple prompt and two walnut-meat taco recipes. The release was sent to hundreds of online and print media publications, inviting readers across the country to spice up their favorite taco dishes by making walnuts the star ingredient. Walnut-Stuffed Korean Street Tacos and Walnut “Chorizo” Tacos were highlighted as two tasty and nutritious meal options, loaded with all the goodness of California walnuts.
In less than a month, the recipe press release earned media coverage with outlets like Yahoo!, International Business Times, the Boston Herald and Minneapolis’ Star Tribune. In California, recipes touted as a plant-forward way to rethink family taco night were placed in the Huntington Beach News, Napa Valley Register, Sonoma West Times and News, Malibu Times, The San Fernando Sun, Santa Maria Times and more.
In total, in the first month of publication, more than 892 outlets shared these walnut-centric recipes and mouthwatering photos to nearly 180 million people.
In addition to the earned media and in an effort to build an increased awareness of walnuts as a taco meat alternative, CA Walnuts also shared a blog post titled “3 Must-Try Plant-Forward Taco Recipes” that was shared on Facebook, Twitter, Instagram and IG Stories utilizing the hashtag #NationalTacoDay. The post reached 82,800 people, generating 26,400 video views.