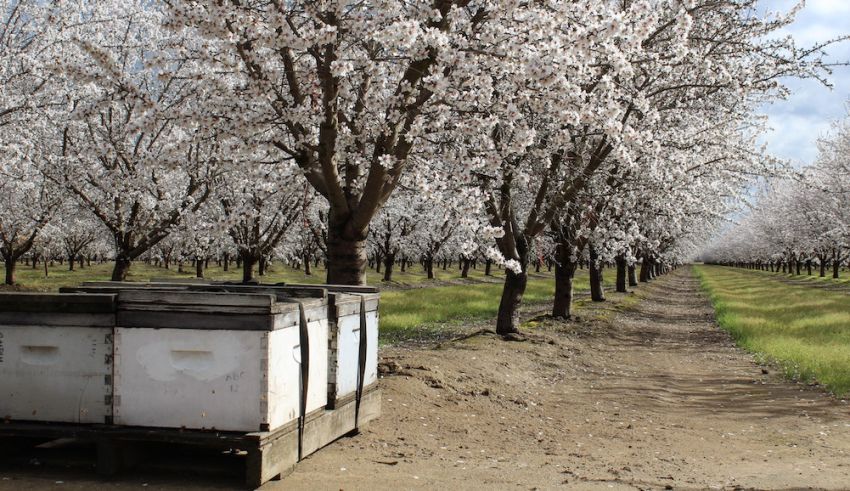 In California, honey bee colonies in bee boxes are placed in almond orchards to pollinate the crop.

Researchers at the U.S. Department of Agriculture’s (USDA) Agricultural Research Service (ARS) have found that a component in almond nectar and pollen can reduce honey bee viruses and gut parasites, which are some of the leading threats to bee health and colonies.

“We have found nectar chemicals can work as an antibiotic in bees, even against important viruses,” said Jay Evans, USDA-ARS research entomologist. “We were interested in amygdalin as a possible inhibitor of bee disease, because it is so important to the diet of honey bees.”

The bees were fed natural concentrations of amygdalin over a two-month period as part of the study conducted in a bee yard at the Bee Research Laboratory in Beltsville, MD. In the treatment group, bees received a sugar solution supplemented with dissolved amygdalin from a supplier. The control group just received sugar water.

The findings showed that amygdalin, which was previously reported to cause malaise in bees when fed sugar syrup, did not cause any negative effects to bee behavior.

Amygdalin is not only found in the nectar and pollen of almond trees, but in a variety of other crops, such as cherries, nectarines and apples. During almond pollination season, western honey bees inevitably consume the natural compound since almond crops are almost exclusively pollinated by honey bees.