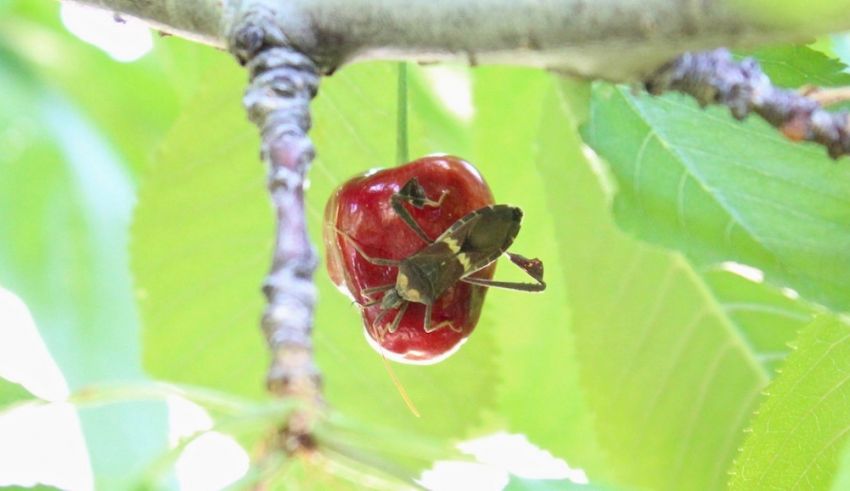 Leaffooted bug on cherry (photo by Matthew Malcolm)
Almond Board of California — Insect pest management in almond and pistachio orchards largely focuses on reducing damage from navel orangeworm (NOW). Yet, after navel orangeworm, large bugs such as leaffooted bugs (LFBs) and stinkbugs are considered to be among the most damaging insects.
Leaffooted bug species of particular concern in the past have included Leptoglossus clypealis, Leptoglossus occidentalis, and Leptoglossus zonatus. Leptoglossus clypealis is occasionally noted to be numerous: In 2013, L. clypealis was a particularly abundant LFB in orchards; however, since that time, L. clypealis seems to be less common than another LFB, L. zonatus.Recognizing and understanding the differences between these two LFB is key to effective management. 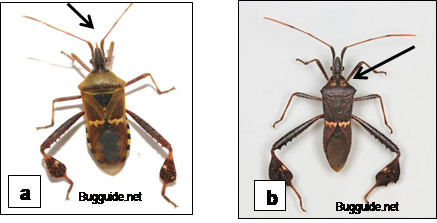 L. clypealis is shown on the left and L. zonatus on the right. Photo courtesy of Dr. Joyce.L. zonatus is a larger LFB than L. clypealis and has longer mouthparts that allow it to feed on developing fruits longer into the growing season. Prior to 2013, L. zonatusdid not appear regularly in almonds in California, and it was not noted in University of California Integrated Pest Management manuals as being a pest of almonds – while this species was present in California, perhaps it was not particularly numerous. Since 2013, L. zonatus has frequently been observed in almonds during the growing season and at harvest, and now seems to occur more regularly in orchards than L. clypealis. It may be that the larger LFB L. zonatus is displacing L. clypealis.From 2014-2016, researchers identified LFB collections in almond and pistachio orchards from Chico to Bakersfield as consisting of two species: L. clypealis and L. zonatus. A 2017 study by Dr. Andrea Joyce, an entomologist at the University of California, Merced, investigated population genetics of these two species and found that L. clypealiscollections have high genetic diversity and many genetic types (haplotypes). This suggests that these L. clypealiscollections from the Central Valley are within this insect’s native range. However, the insect collections of the other species, L. zonatus, consisted of two genetically divergent types, or strains. One L. zonatus strain was widespread, and occurred through the Central Valley from Chico to Bakersfield, and the second genetic type occurred in the central and southern San Joaquin Valley. Work to geographically map out where the two genetic types of L. zonatus occur is ongoing.The presence of two strains of L. zonatus is important for insect pest management. It is highly likely that each insect strain is susceptible to different parasitoids, predators and pathogens. Two insect strains can also vary in their response to insecticides, as well as their attraction to pheromone lures.Currently, pheromone attractants are being developed for this LFB. It is vital to determine if the same pheromone blend will equally attract the two strains of L. zonatus. Dr. Joyce and colleagues will continue research on the two strains of L. zonatus this year, comparing their biological parameters, examining whether the two strains are cross attracted in lab bioassays, and if they cross mate in the field. The hope is that any pheromones and attractants developed for L. zonatus can be used to manage both strains of this species. A monitoring tool such as a pheromone trap for these insects would be particularly useful in a grower’s IPM toolbox.Growers can support researchers in determining the distribution of the two strains by collecting any LFBs they identify or notifying Dr. Joyce when large numbers of LFBs are observed. Growers may email Dr. Andrea Joyce if they sight LFBs or have questions about this pest at  ajoyce2@ucmerced.edu.Note: Additional Almond Board-funded research is being conducted by Dr. Jocelyn Millar to identify pheromones and related attractants for the two major LFB pests in California nut crops. These tools could potentially be utilized for monitoring or control of these species.
Click To Comment