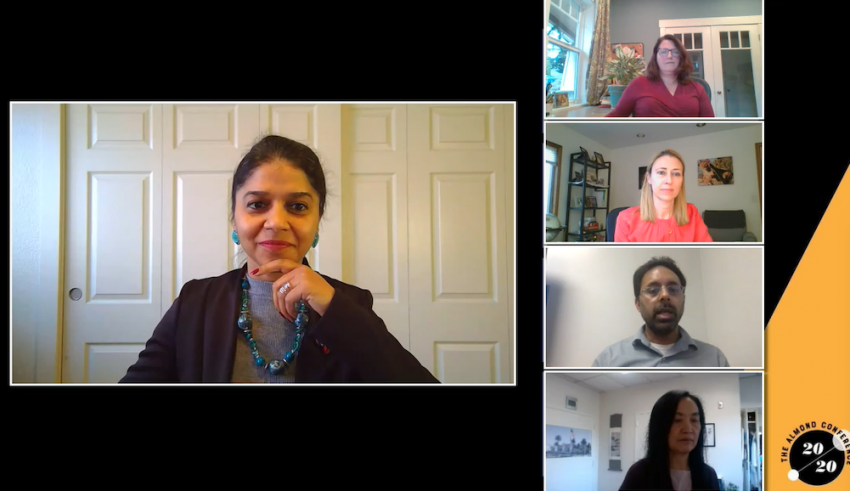 Almond Board of California – Logging in instead of looking for a place to sit. Walking from the coffee pot to the office chair instead of driving to Sacramento. Connecting with attendees via online chat instead of shaking hundreds of hands while walking the trade show floor. Instead of sitting shoulder-to-shoulder in session rooms, participants of The Almond Conference (TAC) 2020 connected remotely from their office, the seat of their pickup truck, or, perhaps for some, from their favorite recliner.

The 48th annual staging of The Almond Conference on December 8-10 looked much different than past events. Still, the structure and offerings of the Conference provided an opportunity for industry members to gather and learn about the latest research, marketing efforts, and global developments impacting the industry. From the (un)usual State of the Industry to 30 educational sessions, an exhibit hall and even an online version of the Passport Game, the Conference provided many of the same features that attendees have come to expect from the premier almond industry event. The Almond Board of California (ABC) Industry Relations team saw the need to host a virtual event as an opportunity, not a hindrance. The online setting provided the opportunity to host a truly global event, bringing attendees and speakers from across California, the U.S. and the world. More than 3,000 attendees representing 45 countries participated in TAC 2020 and had virtual access to 149 exhibitor booths, 30 educational sessions and 14 sponsor presentations.

“It was a pretty amazing experience. The three days just flew by,” said ABC President and CEO Richard Waycott during the live Closing Remarks. “It was a great example of the flexibility of our staff and the resilience of the industry throughout this year.”

This year’s State of the Industry address featured Waycott hosting ABC Board Chair Kent Stenderup and Vice Chair Brian Wahlbrink in a “late-night” TV show setting at the historic State Theatre in downtown Modesto. Stenderup and Wahlbrink provided an overview of key trends and marketing challenges faced by the industry throughout 2020, as well as insights into strategic ABC initiatives aimed at further supporting the industry’s profitability. From the massive responsibility of marketing a projected record 3-billion-pound crop to ongoing trade tension with China and growing advancements in production technologies, the address set the stage for the rest of the Conference.

“Growers were worried about what we were going to do with all these nuts,” Stenderup noted, referencing the fact that production is up 32% (about 730 million pounds) compared to just two years ago. And yet, he said, processing facilities are working harder than ever before to get almonds out the door. “With the advent of a possible 3-billion-pound crop, I witness handlers very responsibly getting out in front of it and moving product, setting monthly shipping records.”

Wahlbrink praised ABC’s Global Market Development Committee, of which he is a member, for building global demand in emerging markets beyond traditional export leaders like India, Spain, China and Germany.

“Despite everything, we increased shipments by almost 5% [in the last crop year], which is a real testament to building global demand year on year,” said Wahlbrink.While the industry is ready to turn the page on 2020, Waycott praised the California almond community for remaining headstrong in facing each challenge. “It has been a remarkable year,” he said, “but there were a number of curveballs that came our way. COVID-19. A lockdown in India, our biggest market, fires in California, a perfect bloom, and now we’re headed to a 3-billion-pound crop. Just an awful lot to deal with.“Still, the resilience and the ability of this industry to handle a large crop, and to be able to ship the numbers we’ve shipped, is really admirable—congratulations to all of you.”Leadership Recognizing LeadershipDuring the State of the Industry address, Waycott, Stenderup and Wahlbrink honored two esteemed, established industry leaders, the first being Dr. Karen Lapsley. Lapsley, who retired earlier this year after 22 years of service for the California almond industry, began her ABC career as director of Nutrition Research and then acted as the Almond Board’s Chief Scientific Officer for many years before retirement.

“She catapulted us into the area of super foods,” said Waycott. Stenderup referred to Lapsley as the “matriarch of nut nutrition,” crediting her with developing “a health halo” around almonds through her work with food researchers and experts in a variety of human health and nutrition specialties. While reflecting on Lapsley’s myriad of contributions, Waycott got a special twinkle in his eye and introduced a surprise guest to the stage – Lapsley herself! In her remarks Lapsley praised ABC’s long-term commitment to human health research and commitment to scientific excellence. When asked to share the most fun she had during her time at ABC, she said that her efforts to create the Almond Board’s biomass program over the past five years would be among the top of her experiences.

Waycott, Stenderup and Wahlbrink also announced the winner of the 2020 Almond Achievement Award, Jim Paiva, who sadly passed away in November before the award was announced.Paiva planted his first orchard in 1970 in Lost Hills and his properties grew to about 5,000 acres in the Sacramento Valley as well as Kern County. He also started Paiva Hulling and Shelling – which serves hundreds of growers in Northern California – and later co-founded Riverwest Processing in Glenn County.“I cannot think of one person in our industry who is more deserving of this honor,” said Stewart & Jasper CEO Jim Jasper, who was the Almond Achievement Award recipient in 2015 and, among multiple other industry members, nominated Paiva for the award.Paiva is survived by his wife Geraldine and sons Jim and Dan. The Almond Board is proud to recognize Paiva’s years of service and dedication to the California almond industry and sends its sincerest condolences to the Paiva family in Jim’s passing.Trade, Policy & Election Outcomes Highlight General SessionsOn Wednesday morning, ABC hosted a general session featuring two nationally recognized agricultural leaders with deep experience in trade issues.Former U.S. Trade Representative Darci Vetter, now vice president at Edelman Communications in Washington, D.C., and former USDA Deputy Secretary Krysta Harden, who today is executive vice president of Global Environmental Strategy for Dairy Management, Inc., shared the virtual stage to discuss the global agricultural scene and how the events of 2020 may affect the future.Vetter said the pandemic is taking an “economic toll that is hugely significant in terms of unemployment, the food and beverage industry, restaurants… We should expect that while trade is really important, there are lots of things on the plate of the administration coming in that will likely take priority.” She also encouraged growers to become more transparent about and comfortable with communicating to consumers, trade regulators and others about what they do and how they grow their product.“Telling our story is important, and when that story comes from the mouths of farmers themselves, it’s even more effective,” Vetter said.Harden agreed, saying American growers are “very committed to the environment” even if “they don’t always know how to measure it or talk about it, and don’t want the spotlight on what they’re doing.”“No one can produce more than U.S. farmers, but having the best product is not enough. You have to be accountable,” Harden said. “Some farmers don’t want to have these conversations, but if they don’t, they may not be farming in a decade.”The following morning respected political journalist Charlie Cook, publisher of The Cook Political Report, addressed the Conference from his home in the Nation’s Capital. For more than 35 years, Cook has been highly regarded as a non-partisan observer of U.S. politics. During this general session, he provided insight into the state of our nation’s political landscape after one of the most divisive presidential elections in American history.“I think we are losing our fabric as a nation,” Cook warned. “We are supposed to be the United States of America, but we’re not very united right now.” On a positive note, Cook believes Tom Vilsack – President-elect Joe Biden’s nominee to run the U.S. Agriculture Department – is a good choice for the California almond industry. Many industry members will remember Vilsack as he served in the same role for eight years under former President Barack Obama.

“I think Biden made a good decision to pick someone from the ag side who knows the whole set of issues,” Cook said. “Vilsack knows about your sector. My guess is you’ve dodged a bullet, because if he went with a more urban-oriented person, you wouldn’t have gotten the time of day.”

Educational Sessions, Virtual Exhibit Hall ‘Just Awesome’The Conference virtual exhibit hall – though missing the buzz of attendees rubbing elbows as they migrated from booth to booth – still provided a way for exhibitors and sponsors to interact with participants. “The exhibit hall was really well done – it was just awesome,” Wahlbrink said. “It made it really easy to access information and have a quick chat.”Similarly, the format of this year’s educational sessions allowed attendees to tune in while on the road or in the office, an element of the virtual event that was largely well received. “I appreciated the ability to still work during this busy time of year while also attending the sessions. I was better able to focus on the sessions,” commented one attendee in the post-Conference survey.Even though the Conference is expected to return to Sacramento next year, Waycott predicts a hybrid model will be put in place to allow attendees the option to participate in at least a portion of the Conference virtually.Final session recordings and presentation slides are now available at Almonds.com/Conference – be sure you check out any sessions you could not attend! And be sure to mark your calendar for next year’s event, The Almond Conference 2021 is scheduled to be held Dec. 7-9 at the Sacramento Convention Center.

Editor’s Note: Read more about the proceedings from the Almond Conference in the coming issue of Pacific Nut Producer Magazine.
Click To Comment