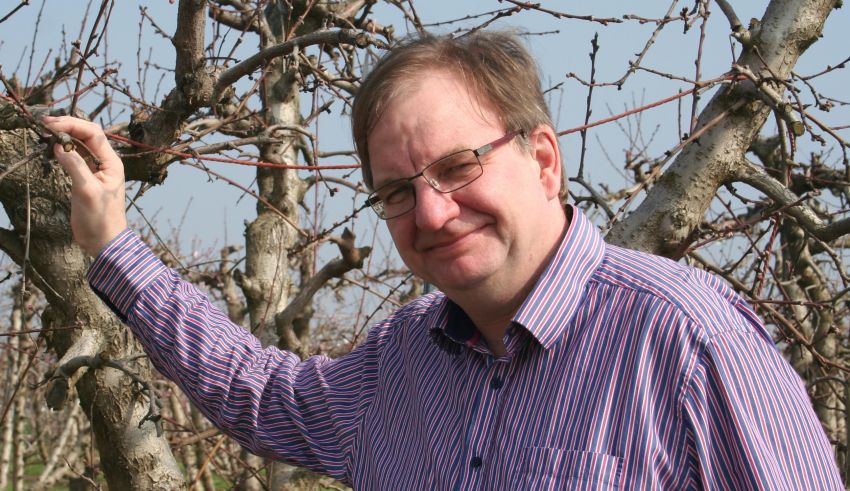 Walnut production is most productive on deep-rooting uniform soils with good water-holding capacity. Such soils are also conducive to infestations of plant-parasitic nematodes. Currently, the key pest of concern in walnut plantings is root lesion nematode (Pratylenchus vulnus). In California, this nematode is wide-spread in walnut producing areas and is estimated to be present in almost 85% of walnut orchards.

Because of the longevity of a walnut planting, even barely detectable nematode numbers can cause damage to the traditional rootstocks in the life span of an orchard. English and Paradox rootstocks are susceptible to root lesion nematode. Other nematodes, root-knot nematodes (Meloidogyne spp.), can cause damage to English rootstocks. The third species frequently present in walnut soil is ring nematode (Mesocriconema xenoplax) but its damage potential has not been as well documented as for the lesion and root-knot nematode.

Plant-parasitic nematodes entirely depend on their host plants to sustain themselves. They can injure root tissues directly, and also consume photosynthetic nutrients that otherwise would be used for plant growth and nut production. Trees of all ages are susceptible, but newly planted and young trees are especially sensitive. In addition, the so-called replant problem, a biologically-incited disease that is poorly understood, can hinder the establishment and growth of new plantings.

Nematode problems become most challenging when an old orchard is removed and replanted. Under these conditions, the succumbing trees may have left behind huge numbers of the soil-dwelling parasites without symptoms the grower associated with nematode damage. When the young trees are exposed to these high populations, they can be severely damaged. Soil sampling for nematode evaluation when replacing an orchard should be standard practice.

For decades, methyl bromide was used to mitigate these challenges. This material has properties that allow its injection and gaseous redistribution in different soils, and thus was effective in various soil types and soil conditions. Since methyl bromide was banned in 2005, control options have relied heavily on 1,3-D products (Telone) and mixes of 1,3-D and chloropicrin. These are suitable soil fumigants under appropriate soil conditions, especially the soil moisture must be adjusted to the required range, and soil temperatures needs to be in the proper range. Soil preparation including deep-ripping (at least 5 ft) for alleviating obstructive soil layers and removal of old roots is even more important in a 1,3-D fumigation than it was when treating with methyl bromide. Achieving these conditions is more challenging on fine-textured soils. Many growers resort to cover cropping with, e.g., a winter annual grain crop to remove excess soil moisture during the spring and summer before fumigation is performed. Reaching highest levels of performance despite all these preparations may still be a challenge. Use of 1,3-D fumigation is restricted to a maximum annual amount that may be used under a so-called “township cap”.

Clearly, more sustainable methods of nematode management in walnut orchards are urgently needed. Three main avenues are currently being researched at the Kearney Agricultural Research and Extension Center: (a) development of walnut rootstocks with elevated resistance or tolerance to root lesion and other plant-parasitic nematodes, (b) implementation of chemical nematode suppression using novel nematicidal chemistries, and (c) biorational methods that rely on the use of organic amendments and cover crops for nematode suppression.

Development of nematode-tolerant walnut rootstocks is an ongoing program inherited from the long-term efforts at the Kearney Agricultural Research and Extension Center. With the knowledge leap of mastering the in vitro production of new inter-species Juglanscrosses,it has become possible to produce saplings originating from cross breeding. This process allows for a much improved and accelerated breeding because many plant copies can be easily made for testing of desirable tree genotypes. The nematode tolerant rootstock ‘VX211’, Phytophthora root rot resistant ‘RX1’ and the vigorously growing ‘Vlach’ are early examples of new rootstocks developed using this approach. A team from the University of California, USDA-ARS, California State University Fresno and UCANR has come together to work on rootstock improvement. Genetically diverse walnut material is produced by the breeder and given to plant pathologists, the nematologist, and physiologist for concomitant examination for desirable rootstock and scion-compatibility traits. In the nematology program, trees are planted to field plots, inoculated with root lesion and root-knot nematodes and monitored for at least two years. At that time, nematode numbers in the roots and multi-year plant growth data are used to identify elite selections that are then transplanted from the original selection orchard and further monitored for vigor and nematode dynamics. Two years after transplanting, trees are grafted to the scion ‘Chandler’ to examine graft compatibility in parallel to the root evaluations. This program has been successful in identifying advanced elites that outperform currently used clonal rootstocks under high nematode and replant problem pressure. In winter 2018, a collection of elite nematode-, Phytophthora-, and crown gall-resistant selections was planted at the Kearney Agricultural Center in Parlier, and more trees are scheduled to be planted this spring at the Nickels Soils Laboratory near Arbuckle.

The second approach that is pursued is evaluating novel nematicidal chemistriesfor their activity against nematodes that affect walnuts. After many years of having few new products available for testing, several new products have recently become available. In general, these materials are much safer for the user and the environment than the old compounds were.

The application of traditional preplant soil fumigants was relatively simple compared to newer non-fumigant products. A large tractor could apply traditional products using shanks to deliver the material to the proper soil depth. Gaseous redistribution of the material fostered good soil penetration and nematode suppression. The non-fumigant character of the new chemistries requires delivery to the site of action. This is most efficiently accomplished by a 6 acre-inch preplant water drench via a drip irrigation system. Some of the compounds need to be applied underneath a tarp for user and bystander protection. While this process is logistically challenging, it does offer promise because only a few pounds of active ingredient per acre are effective in killing nematodes compared to several hundred pounds of the old traditional materials.

In post-plant situations, the newer products are less cumbersome to apply than preplant situations partially because existing irrigation systems may be used. Typically, lower amounts of materials are applied that do not result in the high mortality required of preplant treatments but even modest population reductions (for example, around 50%) in established orchards can improve tree growth and productivity. After several years of field testing of the new chemistries at Kearney, CWB-supported work is now underway in commercial orchard field trials.

Lastly, novel organic amendments and cover crops for nematode suppressionare tested. Large amounts of organic waste material accrue from various sources in California and novel ways of using them – or products derived from them – are coming on line. In California, a recent focus of this research has been on exploiting novel characteristics of anaerobically digested food waste and animal manures. The fermentation process is implemented for biogas and ultimately bioenergy production. The finding that some of the by-products of this process, called digestates, can suppress plant-parasitic nematodes, while also serving as a nutrient source, is being explored in walnuts and other nut crops.

Strategies that rely on processes that occur within the field are also under study. In anaerobic soil disinfestation (ASD), large amounts of organic substrate (typical 9 tons/acre of rice bran or other organic material) are spread on the soil surface, incorporated, and the soil kept moist under tarp for about one month after an initial complete soil saturation. This method is logistically challenging but has shown high levels of efficacy when preparing nursery sites for planting. Another approach shown to effectively suppress nematode populations is “biofumigation”, in which Brassica crops such as various mustards or radishes are planted and subsequently incorporated into the soil. Using similar Brassica crops as “companion crops” within walnut orchards also takes advantage of the capacities of these crops. Planted after harvest close to fall rains, cover cropping with cool-season Brassica can be a straight-forward process with few logistical challenges. The hope is that the Brassica species reduces nematode infestation by trap cropping the nematode pests or by actively reducing the populations via root exudates.

In summary, with CWB support, a multi-pronged approach is investigated to alleviate the devastating impacts of plant-parasitic nematodes in walnuts. These studies are often highly collaborative with other experts of walnut production. The goal is to increase profitability and sustainability of walnut production while reducing its environmental impacts. This work is made possible by the gracious industry and government agency support coupled with the efforts of a highly dedicated nematology team, support from the University of California – Agricultural and Natural Resources, and the generous cooperation of grower and farm advisor collaborators.