Wednesday , 27 January 2021
Home Industry News Almonds Bill Lyons honored as Member of the Year by the Almond Alliance of California 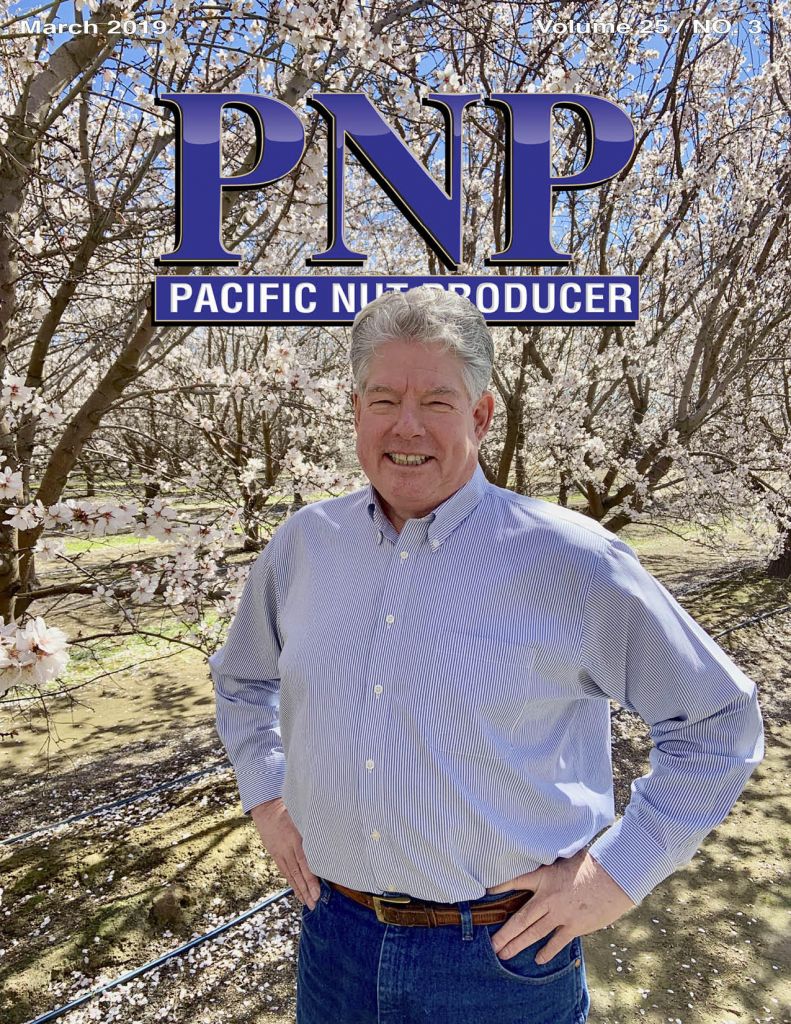 The Almond Alliance of California has selected Bill Lyons, a third generation farmer from Modesto, as its Member of the Year. The award was announced at the Alliance’s annual convention held in Napa April 30-May 2.

“Bill played a leading role in helping transform the former Almond Hullers and Processors Association into the Almond Alliance with an increased emphasis on advocating for all sectors of the California almond industry,” explained Alliance President Elaine Trevino. “He has been a relentless advocate for the industry and was instrumental in forming the California Almond Industry Political Action Committee, helping to give the industry high visibility among state decision makers. He has also distinguished himself as chair of the Alliance’s Government Relations Committee which provides guidance to the board on critical legislative and regulatory issues impacting the California almond industry.”

Lyons was recently appointed by Gov. Gavin Newsom as Agriculture Liaison in the Office of the Governor, responsible for reporting to the Newsom Administration on a wide range of agricultural and water policy issues. Under Gov. Gray Davis, he served as Secretary of the California Department of Food and Agriculture from 1999 to 2004.

While Lyons has stepped down from his Alliance roles due to his appointment, he remains a strong voice for the California agriculture on issues ranging from water to foreign trade. “Bill understands the complexity of production, food safety, environmental, water and trade issues affecting California agriculture,” said Trevino. “He brings us a seat at the table and provides a much needed balanced perspective to critical policy discussions.” Bill understands the importance of including diversity of opinions in important policy discussions.

During the time he oversaw his family’s 95-year-old farming and cattle ranching operation in Stanislaus County, Lyons has received numerous national and state awards for his environmental stewardship and conservation efforts. The family farming operation produces a wide range of agricultural commodities, including almonds, walnuts, tomatoes, corn, wheat, oats, rye, alfalfa, beans and wine grapes, as well as beef cattle.

Lyons served from 1984-1993 as a director on the Modesto Irrigation District, which serves over 250,000 electrical urban and agricultural and water customers, providing him a unique perspective on the issues facing both agriculture and urban water and electrical customers.

Bill’s alma mater, California State University at Chico, honored Bill in 2000 with the Distinguished Alumni Award. He and his wife, Suzy, live in Modesto and have four children and five grandchildren.

Read more about the proceedings of the Almond Alliance’s 2019 convention in the coming issue of Pacific Nut Producer Magazine.  Subscribe for FREE today at:

About the Almond Alliance of California

The Almond Alliance of California (AAC) is a trusted non-profit organization dedicated to advocating on behalf of the California almond community. California almonds are an  economic powerhouse, generating more than $21 billion in economic revenue and directly contributing more than $11 billion to the state’s total economy. California’s top agricultural export, almonds create approximately 104,000 jobs statewide, over 97,000 in the Central Valley, which suffers from chronic unemployment. The AAC is dedicated to educating state legislators, policy makers and regulatory officials about the California almond community. As a membership-based organization, our members include almond processors, hullers/shellers, growers and allied businesses. Through workshops, newsletters, conferences, social media and personal meetings, AAC works to raise awareness, knowledge and provide a better understanding about the scope, size, value and sustainability of the California almond community. For more information on the Almond Alliance, visithttps://almondalliance.org/or check out the Almond Alliance on Facebook, Twitterand Instagram.