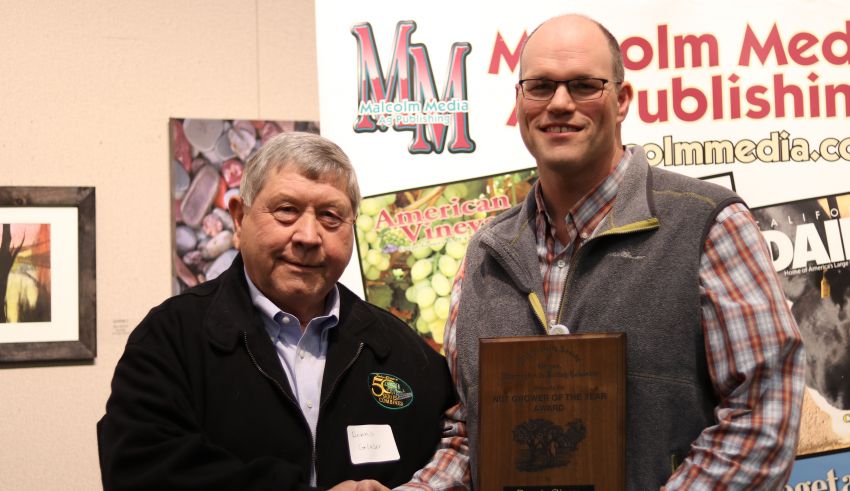 Dennis Glaser of Tangent was the recipient of the Nut Grower’s Society’s Grower of the Year Award for 2018 during its 104th Annual Meeting mid-January. The award is presented to a grower that has been a leader in the industry. Jason Perrott, NGS Vice President presented the award. He began with some history. Dennis’s roots are in farming. Before becoming a grass seed farmer his father, Frank, was the largest bee man in the state. He also raised silver foxes for fur. After the war both businesses were sold and the family venture in grass seed began. The family always had a big garden and his mom would get a hundred chicks each spring. The lucky ones survived the axe and lived another year as egg layers. Dennis learned valuable lessons about hard work and where our food comes from.

Growing up on the farm everything was done by hand. Unloading railcars of fertilizer, bagging and stacking sacks of grass seed, and loading the railcars back again with grass seed was all done without even a forklift until 1963. Needless to say there was plenty of motivation to find better ways of doing things.

Dennis went to OSU where he graduated in 1969 with a degree in Ag Engineering and Crop & Soil Science. He took over running the farm in 1972 after his father had a very serious accident. As the 70’s progressed, He started growing clovers and wheat to try to develop some rotation and break up the monoculture of grass seed. The grass seed industry was under pressure to move away from field burning and farm incomes were fluctuating up and mostly down. The farm would make good money two out of five years, broke even about two out of five years, and tried to not lose too much money on the fifth year. The quest was on to find a mix of crops to even out the income pattern.

Paul Willard, owner of Meeker Fertilizer, was a field man, mentor and good friend to Dennis. He offered encouragement in trying alternative crops on their heavy soils. In 1979 Dennis acquired a new farm and was able to grow pretty good wheat on it. With Paul’s influence and the help of mentor Wayne Chambers, he made the decision to try hazelnuts in the flat south valley ground. The ground was tiled, pH was addressed, a well was drilled, and ‘Barcelona’ trees were planted.

According to Dennis, “everyone thought I was crazier than a pet coon. And they were probably right.” This was the only orchard on wet ground in the area.   Dennis was told that trees would never be successful on his ground so he was determined to make a go of it. But times were tough. Interest rates were around 20%. Prices were 65 cents when he planted but had dropped to 30-32 cents by the time of the first harvest. For the first ten years, Dennis wasn’t sure if this was such a good move. But perseverance paid off and the orchard has been a great success and an inspiration for many of the more recent hazelnut farms that have popped up around his orchard.

Dennis always thought he would plant more trees but EFB came along shortly after they established the original orchard. However, with OSU’s outstanding work with newer varieties, Dennis and family have expanded on the original 140 acres planting with an additional 260 acres of Jefferson’s.

Dennis has always farmed with an eye towards a better way. Dennis and his son Ryan have been at the forefront of the hazelnut industry in drainage, pruning and mulching, irrigation, and nutrient management. During the NGS Summer Tour last year Dennis reported on how he began chipping his prunings long before it was an accepted practice. Inviting 1,000 growers to ones farm for a tour is a pretty big commitment to the industry.

And of course Dennis’s service to the industry has been outstanding. He is very generous with his time and resources, is always helping out the neighbors, and is willing to share his experiences good and bad. He has given generously in time and resources to ag research projects at Central Linn High School, the FFA program, and Ag in the Classroom as well as numerous field tours, trials, and yield studies.

Glaser and his family were featured in the January 2018 issue of Pacific Nut Producer Magazine for “Growing Hazelnuts Where No Hazelnuts Had Grown Before.”

“My family has worked with Dennis and his family since 1975,” shared Jason Perrott.  “We were a startup drainage business that Dennis played a key role in getting started. Job #1 was on Dennis’s ground. We have continued to work with Dennis over the years and he has become a mentor to us for our own hazelnut farm. I have great respect for Dennis. He is progressive thinking, always looking to the future, adventurous in his farming practices and a first class human being. Please welcome Grower of the Year Dennis Glaser.”