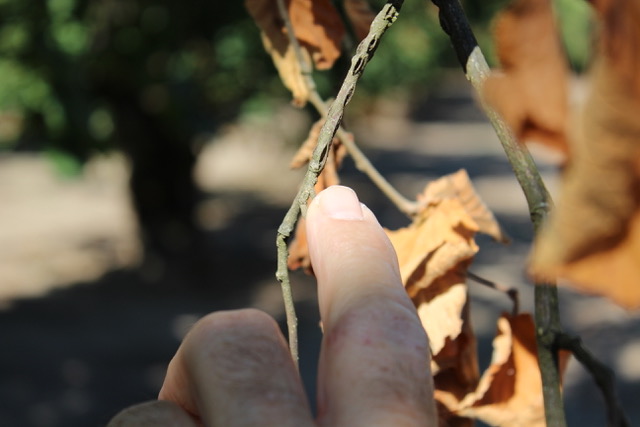 Ziram 76 DF (from United Phosphorus, Inc) was registered for use on hazelnuts on December 12, 2017. Growers must have the supplemental label on hand as well as the label from the product container before use. This material has been very effective on eastern filbert blight. Use this contact only material much like you would any of the chlorothalonil products such as Bravo or Echo. It does not have systemic activity and must be reapplied after significant shoot growth. As always, use at bud break and then every two weeks for two months for best control of EFB.

Testing has shown good efficacy but many of them were done during low disease pressure years. Rates at 1.5 lb/100 gal water resulted in an average of 88% control in two trials. Rates at 3 to 6 lb/100 gallons water have been 100% effective so far. Use of surfactants is recommended for improved handling if not efficacy. Tank mixes with other fungicides is allowed. Application by air is NOT allowed.

We expect more test result in the fall of 2018 when testing was done at high disease pressure. Results are expected to be less than 100% effective but still significant enough to recommend its use.

Strategies for Using Fungicides for Management of Eastern Filbert Blight

Fungicides are best used to protect susceptible tissue in the spring at bud break and for the next 8 weeks. Most fungicides will last 2 weeks before another application is needed. This means a total of 4 applications starting with the first at bud break. Although hazelnuts are still susceptible after this period, additional applications have not resulted in significantly better disease control.

Due to fungicide resistance issues and resulting label requirements, you may not be able to use the same fungicide for all 4 applications. Since the EFB fungus has a long 2-year life cycle the resistance risk is already low relative to other diseases (such as powdery mildew). Strategies to minimize this risk further include alternating and/or tank mixing fungicides with different modes of action. The modes of action for fungicides have been categorized, grouped and assigned numbers such as “group M5”.

Alternating fungicides with different modes of action has been effective to manage EFB. Research has not detected any one alternating strategy as better than any other strategy. We have 5 fungicide groups to choose from including groups 3, 11, M5, M3 and M1. It is suggested that the first application be chorothalonil or Ziram (group M5 or M3) followed by your choice of a group 3 or 11 fungicide. Each of the next two applications would be different from the last one. An example of this program might be to start with Bravo (group M5) at bud break, followed by Gem (group 11) two weeks later, then Tilt (group 3) two weeks after that and ending with Cabrio (group 11). Use of multi-site products such as chlorothalonil (M5), Ziram (M3) or copper-based (M1) products for all 4 applications would also be acceptable.

Do not just alternate fungicides with different trade names as they might have the same mode of action. Some fungicide premixes already are a combination of two fungicides with different modes of action, generally a group 3 and 11 fungicide. These products cannot be used for every application as they do not allow more than 2 sequential applications before switching to a different product with a different mode of action. If you use these premixes you must use an M5, M3 or M1 fungicide in the rotation. An example of this program might be to start with Bravo (M5) at bud break, followed by Stratego (3 + 11) or QuiltXcel (3 + 11) 2 weeks later, then the same product 2 weeks after that but ending with Bravo.

Research has indicated that the addition of a surfactant will provide better disease control than using a fungicide alone. Numerous products can break the surface tension of water to get better coverage of plant tissue. They also can help keep the fungicide solution in contact with the plant, reducing wash off during rain events. Unless otherwise stated on the label, it is recommended to add a surfactant with a fungicide. Copper-based products have traditionally been applied with horticultural mineral oil. Newer fungicides may be mixed with silicone-based or non-ionic surfactants. Be careful as several fungicides may already come formulated with a surfactant and specifically say NOT to add these products. For example, do not add a surfactant to Bravo, Echo or Quadris Top.